Thinking of introducing solids and wondering when to start? Why is one age better than another? What do you give them, and when?
Read on for my tips to get through without all the confusion!

Is your baby reaching the age for introducing solids? Do you think they should probably be having a little more than just milk? Then you will be starting to look everywhere for the answers on when to start, and what to give them. And you’ll know it’s an overwhelming topic, with lots of contradictory advice!

It can be a stressful time for parents, wanting to do and give the best for their little people. And with good reason. A healthy start to solids lays the groundwork to future wellbeing and positive attitudes around food. Eek, no pressure!

There are a lot of mixed messages around the best time to start introducing solids and what to give a young infant. So, I’ve done the hard work and broken down the current research and knowledge for you. I’ve also included my top tips on introducing solids (which I have used for my daughters). 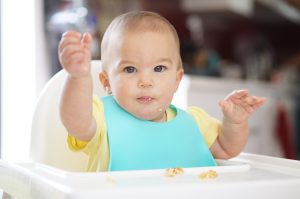 What we know: current research and facts

Current research recommends introducing solids at around six months, but not before four months [1]. Many website authors have interpreted this as ‘introduce solids from four months’, but it doesn’t mean this at all. Research shows that introducing solids before the age of four months increases the risk of atopic disease and food allergies, but so too can leaving it until after six months [2,3]. Another study found no evidence of any benefit from additional foods for infants between four and six months of age [4].

In addition, starting too early can be detrimental to their still-developing digestive system. From the ages of four months up until 12 months, infants are developing the various enzymes required to fully digest proteins, fats and carbohydrates. In fact, they don’t develop enough pancreatic amylase to fully digest starches until around 12 months (but can digest those that are very well-cooked). This means well-cooked vegetables are great early foods, but some grains are much harder for them to digest until after 12 months or even later. 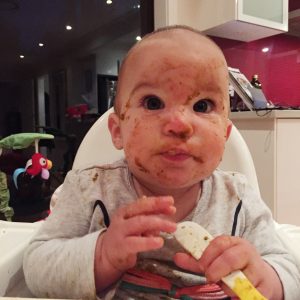 Messy eater, who, me?

My 4 Top Tips For Introducing Solids

1. Find the ‘sweet spot’ and start when they are ready

I believe there is a sweet spot in which to begin introducing solids. This should be based on the above – around six months. But to work out when they are ready it is important to also go on the individual child and their personal development.

Good head and neck control, and the ability to sit upright. With some support. There is a visible shift in their ability to sit around the same time that they are developmentally ready to start solids. I found that my girls were able to sit in their highchair, with a towel for support, quite well around a week or so before they turned six months.

The tongue-thrust reflex starts to reduce. This reflex is the one that pushes those purées back out of their mouths! But it is actually a baby’s inbuilt safety mechanism to prevent choking. This reflex subsides between four and six months old. (See #3 below for more on this).

The ability to reach out and grab things. If they are reaching out, picking things up and bringing them to their mouths, then they have ticked off another developmental element. You may also notice that they start watching you intently when you are eating. Food envy starts early, my friend!

2. Remember that solids are ‘complimentary foods’

The term ‘weaning’ can be misleading, as it implies your baby’s milk intake will reduce. It will, but not straight away. Early solids are not intended to replace milk feeds, and really are “in addition to” milk instead. It’s also very easy to get trapped in the belief that your baby needs to eat as much as possible from the get-go. That puts a lot of pressure on parents to get the food into an unwilling mouth! It adds unnecessary stress that you just don’t need. So, it’s worth remembering that solids are ‘complimentary foods’ in addition to breast milk and formula. 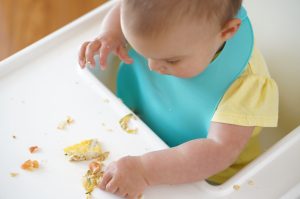 My daughter self-feeding at 8 months

3. Accept that to begin they will spit out more than they swallow!

Your baby’s ability to take foods in and the transition of the tongue-thrust reflex improve quickly, and within a few weeks you will notice that much less food is being spat out. In my experience, this improvement happens even more quickly when the baby is in charge of their food and is self-feeding.

You may be worried about the amount of food being spat out. It’s true that babies’ have increased needs for certain nutrients (iron, for example), so it can be a bit stressful when they spit out or drop more food than they eat. However, by ensuring their bowls are full of nutrient-rich foods (especially iron-rich) you are already helping with their intake of important nutrients.

4. The best first-foods to start with

Well-cooked vegetables are the best foods to start your baby with – whether you’re doing purées or baby-led weaning. Soft-cooked carrots, sweet potato, pumpkin, zucchini/courgette, broccoli, parsnip, peas, cauliflower and potato. Avocado is a great addition, as it adds in healthy fats. Soft-cooked beans (kidney, cannellini, black etc) are also a great addition, providing all-important iron and fibre in the diet.

You can also offer soft, ripe fruit – pear, banana – and soft-cooked fruit – apple, other stone fruits. However, it is best to keep fruit to a minimum to help develop the palate on savoury foods, and encourage your child to love their veg. Keep some cooked, frozen pear handy to help whenever the poos become a little MIA – which can happen when their baby tummies are first adjusting to the new foods. 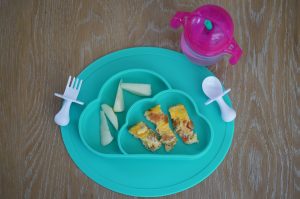 My 8 month-old’s lunch: omelette, pear and water. Yes, she ate much more than this!

If your baby is six months old, then you can go ahead and start solids (unless there are any developmental delays that could prevent this). If they are between four and six months old, then look out for the signs that they are ready, as all babies develop at different rates. Try to aim for closer to six months, than four. And if they are under four months old, please hold off from the solids until they are more ready.

For more advice on feeding your baby, get in touch with me via the Contact page or at hello@therealnutritionist.com to arrange a ‘baby-sized’ consult and feeding plan package deal!

BONUS: get my FREE eGuide now – click the title below:

“Stress-Free Solids: A guide to introducing new foods while managing intolerances and allergies”