This delicious gluten free crumble was created last week when I needed an easy dessert to take to my neighbours’ for dinner. My neighbour is Coeliac, so it’s particularly important that my desserts are 100% gluten-free for her! I had some pears and raspberries, oh and some raw buckwheat (as you do), so I used these to kick start my inspiration on what I was going to create. I often make them things I’ve never made before, which is quite a gamble – eg buckwheat crumble – but it always somehow works out okay, and this particular creation went down a treat! So much so, they asked me for the recipe so they could make it later in the week for their friends! Always a good sign…

Buckwheat is a little misleading, as it’s not a wheat at all – in fact it’s a seed. So it’s completely gluten free, despite its name, and perfectly safe for those with Coeliac Disease. It’s a great source of fibre, protein and antioxidants, as well as several minerals like manganese, magnesium, iron, copper and phosphorus. It can be prepared in a number of ways, but toasting/roasting the groats (the whole grain) is a great way of creating a really crunchy texture. It’s best to soak the raw groats for as long as possible, preferably overnight (although 1-2 hours is enough if you’re not eating a huge quantity), which helps break down the phytic acid. This ensure better digestibility and easier uptake of the nutrients.

The almond meal (aka ground almond) provides protein, healthy fats, fibre, magnesium and vitamin E. The quinoa flakes are a further source of protein, and make a great alternative to oats which are often not 100% gluten free and therefore cannot be eaten by Coeliac sufferers (but otherwise feel free to substitute for rolled oats!). Chia is another source of protein, as well as Omega-3s and calcium. And the beautiful pear is a great source of fibre, as well as vitamins C and K, and minerals potassium and copper. So, basically, this is a super-healthy, nutrient-dense dessert to serve up! 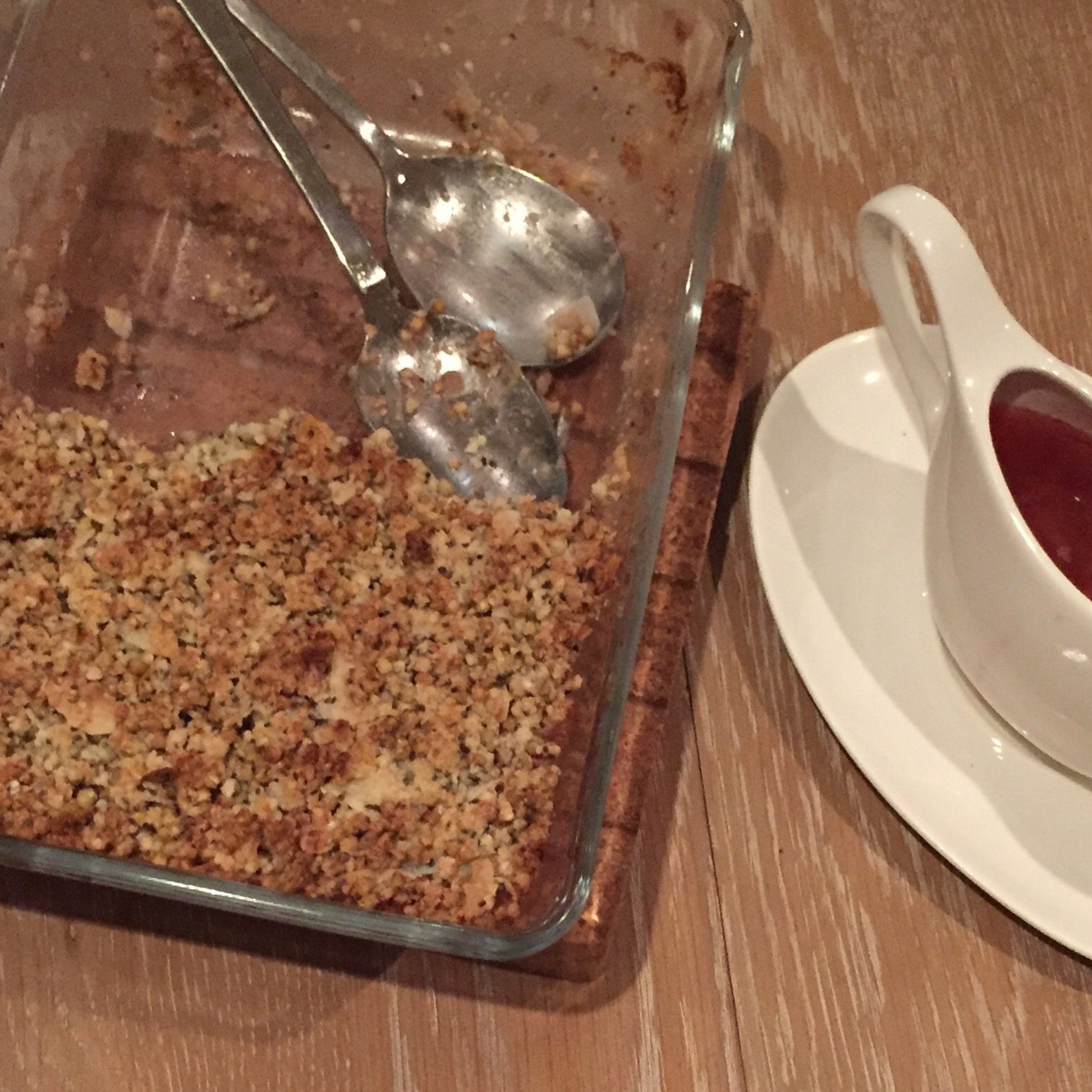 When dessert is so delicious, you don’t get a photo until it’s half-eaten!

*When using raw buckwheat groats, place in a bowl of cold water and leave to soak overnight, or for at least an hour. Heat the oven to 180C. Drain the buckwheat and rinse in a colander. Lay the groats in a thin layer on baking paper on a baking tray (or two) and place in the oven for 15-20 minutes until dried and browned.

Place chopped pear in a saucepan – if unripe, add a cup of water, but if very ripe the pears will be juicy enough as they are. Place on a medium heat witha  lid and bring to the boil. Reduce heat and let simmer for 20 minutes. Add the stevia (optional) and raspberries, stir and bring back to the boil without the lid, until water has reduced to a more syrupy consistency. If the pear is very ripe, you may end up with a lot of liquid – just save this in a jug and serve warm with the crumble.

Meanwhile, mix the dry ingredients in a bowl, including the toasted groats. Add the coconut oil and combine.

Place the fruit in a medium-large sized baking dish, then layer over the crumble mixture. Place in the preheated oven for around 20 minutes, until the crumble topping starts to brown.

Serve warm with a dollop of plain yoghurt or cream. Enjoy!